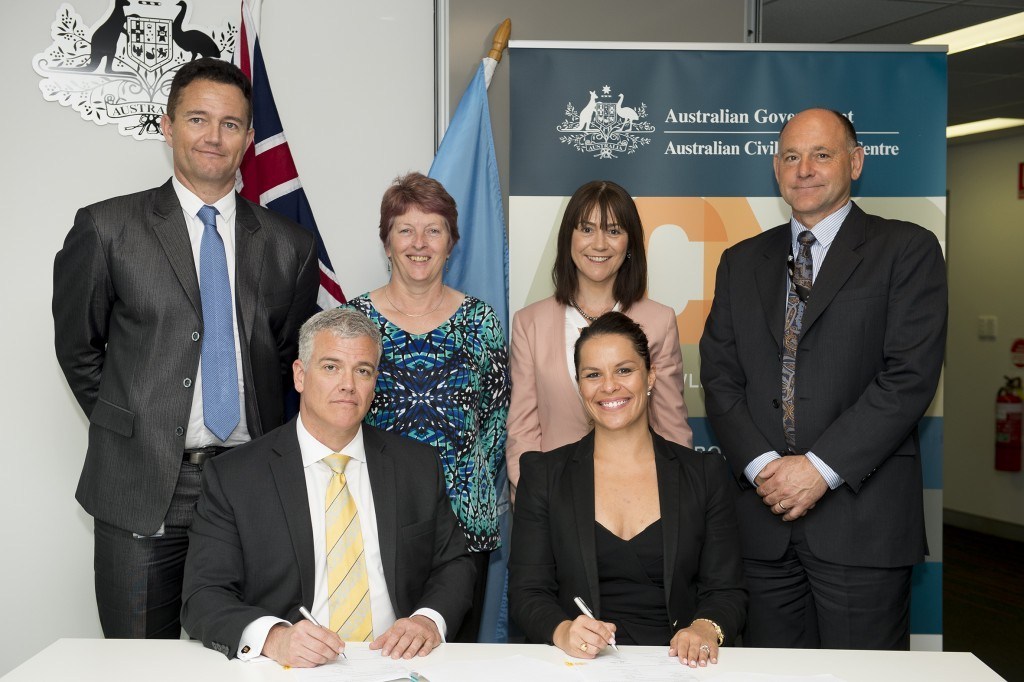 An exciting start for 33 Creative under the Indigenous Procurement Policy

On 4 November 2015, 33 Creative signed the contract with the Australian Civil Military Centre (ACMC) in a ceremony at their offices in Queanbeyan.

The contract marks the beginning of a strong relationship with ACMC, which was fostered under the Indigenous Procurement Policy and signals a first for both 33 Creative and the ACMC.

Dr Ryan stated that ‘the signing of this contract with 33 Creative is a very exciting opportunity for the Australian Civil-Military Centre to access the Indigenous suppliers program. As a small organisation we need to source outside expertise, such as that offered by 33 Creative, to produce high quality resources for Australian government agencies and for the international and non-governments organisations that we work with,’ said Dr Ryan.

This contract was a great example of the move to encourage supplier diversity and to build new relationships between the public sector and private sector providers. Dr Ryan pointed out that the contract represented a good match of organisations that shared a mission to innovate and whose skill-sets were strongly complementary. He noted that it was very much a ‘win/win’ partnership.

Signing the contract Dr Ryan stated that ‘the Australian Civil-Military Centre is proud to enter its first contract with an Indigenous firm and we look forward to the delivery of a DVD that will be an outstanding tool to educate future mission leaders in offshore operations.’

The Indigenous Procurement Policy has been instigated by the Australian Government from July 1st 2015 as a method of further engaging and developing Indigenous business within Australia. The Policy’s aim is to drive demand for Indigenous business thus improving wealth, independence and employment. It prescribes Commonwealth agencies to meet annual purchasing targets from Indigenous businesses. To find out more go to www.dpmc.gov.au/ipp

An exciting start for 33 Creative under the Indigenous Procurement Policy

The opportunity to work with the ACMC would not have arisen without the Indigenous Procurement Policy.

33 Creative Directors Mayrah Sonter and Georgia Cordukes were both at the signing.

“This is an exciting project for us as it is our first project outside of the Indigenous community. It is a great opportunity to move into other content areas and develop relationships with new clients,” said Georgia.

“We feel we are well placed to work alongside the ACMC on the upcoming Leadership DVD, due to our understanding of complex environments gained from working in the Aboriginal and Torres Strait Islander communication space,” Mayrah said.

The lead up to the signing of the document has been a great process, working closely with the ACMC procurement team to ensure the contract works well for both parties. Time has been spent developing and clarifying expectations of the project and its content on both sides. There is an understanding that the project will be undertaken in the style of partnership between 33 Creative and the ACMC, and it already feels like we are welcomed into each other’s families.

33 Creative is looking forward to working with the ACMC team on this project and developing our presence within the mainstream communications sphere as well as strengthening an already positive relationship with the ACMC, and most importantly producing a great product.